We decided a few months back to take another trip domestically in Japan, since we were not going to do any international travel this year. We rented a house for three days and two nights in the Nasu Angel Forest that is dog friendly. They have dog runs, allow dogs to stay with you, there is a hot springs, pool, and some other stuff. It's up in the mountains, about a three hour drive from Tokyo. 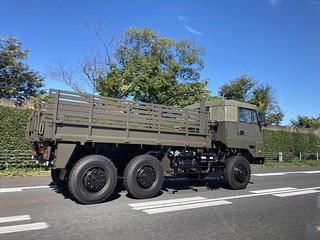 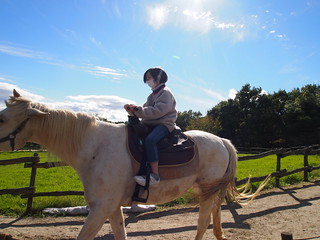 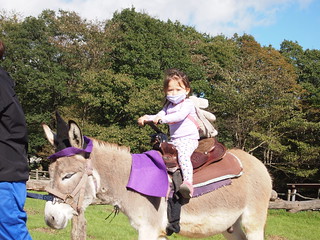 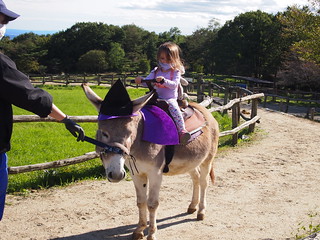 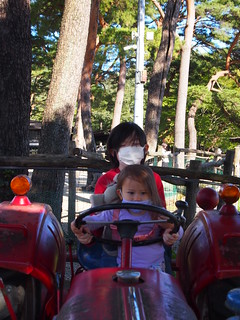 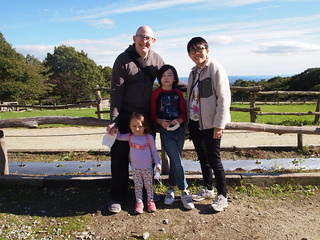 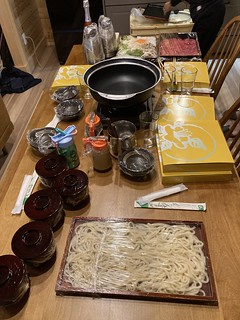 We got up at 6am, pretty normal for us, and got ready to go. Lisa's parents were coming with Sakura, their miniature Schnauzer. We packed up and got in the car at about 7:20am or so. It's a bit tight with four adults, one kid, a toddler, a miniature schnauzer and all our luggage, but we've done this a few times by now and have a system that works pretty well.

The destination is about three hours away, but after a wrong turn or two - the highways in Tokyo are pretty complicated, by the time we get out of the city proper about an hour later we make a stop at a rest area to get out. We get some pastries and drinks, run people through the toilets, and get going again. Our first stop on the trip was the Nasu outlet mall which has a brewery, where Lisa filled up our growler (1.8 liters I think.) Driving through the mountains we saw a number of Self Defense Force vehicles, and Alan asked me to take pictures of them. So we have some of those. I didn't get great pictures though, and I'm still not sure what company makes them - I'm kind of curious about who makes their Hummer equivalent.

After that, we stopped at the Watanabe Nasu Wine shop, which we like. It is kind of crazy that we actually have a favorite winery in a resort area three hours out from Tokyo, but we do. We haven't actually tried other wineries, just that one, but we liked it, so we've gone back a couple of times.

The third stop was the Minamigaoka Farm, a free farm in Nasu that has shops, fish, horses, rabbits, donkeys, and stuff like that. Momo really enjoyed it, she rode on a donkey, and Alan rode a horse. They were led around a bit of a lap, but it was nice. The kids also fed the fish and donkeys, and had ice cream before we left.

The last place was further up in the mountains, the cabin at Angel Forest. The cabin is really nice. It's got six beds in three rooms (well, two rooms, and a kind of landing for the stairs) and a nice outdoor bath. The facility has a larger hot springs that everyone else drove to - I stayed at the cabin and quickly tried out the showed + outdoor bath, but I didn't want to spend an hour at the hot springs like everyone else. Since you have to drive there (or take a pretty long walk!) it is a bit of a commitment.

We'll have a Shabu Shabu dinner at the cabin tonight that was brought to us. The place includes breakfast at the restaurant, and tomorrow night we have BBQ for dinner. I'm not sure what the plans are for tomorrow - hopefully a lot of rest, but I'm pretty sure we will spend a good amount of time at the pool.

The Shabu-Shabu dinner was really good - they brought a large setup of beef and vegetables. Each person also got a bowl of rice (nobody except Alan ate any), a tray of sashimi and assorted things, and noodles. It was way too much food. We saved the rice to make Onigiri, and for lunch will probably have a kind of stew with all the leftovers.

I spent perhaps about two hours writing a script to selectively change the modification time of the pictures since the camera didn't have the date set, and uploaded those. 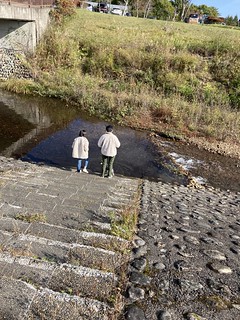 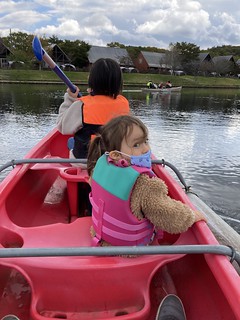 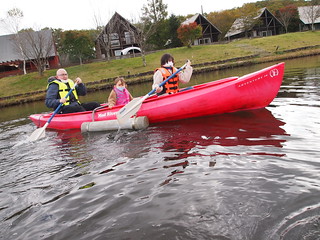 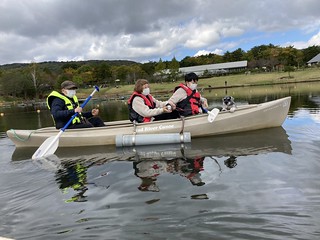 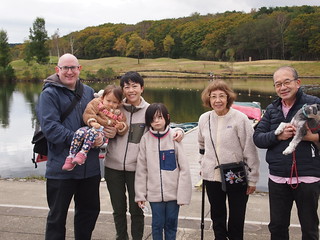 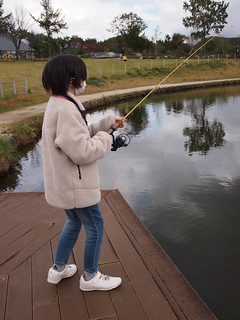 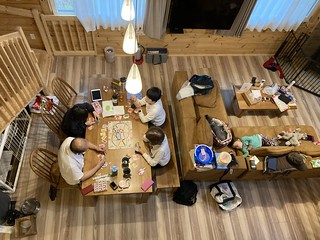 Alan and Lisa woke up at about 5am and went outside to look at stars. I stayed with Momo and she demanded that I tell her stories for about an hour until they returned.

We got up, and played a bit until the breakfast buffet opened at 7:30am. The buffet is open to dogs too (they can't go to the food area, but are allowed in the eating area) sot hat is fun. Lots of families with dogs, big dogs, but mostly small dogs (this is Japan, after all.) The buffet was nice, a standard sort of deal with both Japanese and Western dishes. Alan always goes for the Japanese option: rice, miso soup, and some fish stuff for breakfast. Momo and I both go for the Western options: pancakes, toast, eggs, and so on. Momo also got a bowl of soft-serve ice cream. I'm pretty sure if my dad came to a breakfast buffet with a soft-serve ice cream machine that is all that he'd have.

Alan, Momo, and I walked back to our cabin, it took about ten minutes. The others drove. We didn't have too much time to relax though, because at 10am, Lisa had reserved two canoes for us to boat around the small lake in. Momo really enjoyed the boats - she was very specific that she wanted the red boat, and they were happy to oblige. Alan paddled in front, Momo was in the middle, and I paddled in back. In the other canoe were Lisa, grandma and grandpa, and Sakura. We tooled around the lake for about half an hour until our time was up, and then Lisa went and got fishing stuff for Alan. That took a while, and in that time we went to the dog run, watched Sakura place with the other dogs, and I generally kept Momo amused until Alan and Lisa came back to the lake with fishing gear in tow. Momo was tired, so Lisa and Alan stayed to fish while I drove the others back.

We had some snacks while we waited for Lisa and Alan. They came back about an hour later, without any fish, but Alan had gotten a lot better at casting and had aa good time. That's what counts. For lunch we had a hot pot with the noddles, meat, and vegetable left over from the previous night's dinner. It was really a lot of food even the second time around. Momo finished first, and said that she wanted to take a nap with Sakura on the sofa, so she went over there by herself. Lisa and I were shocked when about ten minutes later she really was sleeping.

We passed the time with some board games (Dixit and Ticket to Ride London were the two we brought.

At about 3pm we headed out for the pool. There is an indoor pool here, a pretty good size, but it isn't deep, about two and half feet (85cm) throughout. There are two Jacuzzi's and a kid's pool (ankle deep!) there too. We brought an inflatable pool ring for Momo, and she enjoyed that. They also have some outdoor pools that are actually just hot springs, so we went out there. Alan complained that it was too hot not too long after we got out there, so we went back into the indoor pool for a bit. The whole time we've been here there haven't been too many people around - we came on a Thursday when Japanese schools are in session (Alan's international school is on a different schedule). Friday afternoon, a few more families started to show up. As we were getting ready to go, two more families showed up to the pool.

We went our separate ways, and promised to meet up in about 20 minutes to go back to the cabin. We had to split up because after the pool we went to the (connected) hot springs, and those are segregated by gender. We had a nice bath, and surprisingly Lisa, Momo, and her mom actually were done 20 minutes later as promised. I had expected a longer wait.

We relaxed for a bit back at the cabin before the food for the BBQ was delivered for dinner. There was a small grill out on the porch, but we ran a lot of good stuff through it: lobster, steak, chicken, sausage, vegetables, garlic rice, and some chocolate fondue for smores. Good stuff! We ate outside, which was a bit chilly, but with the grill completely doable. 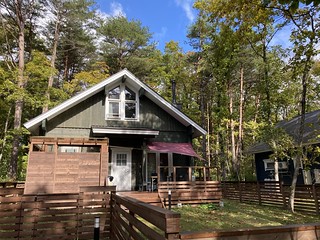 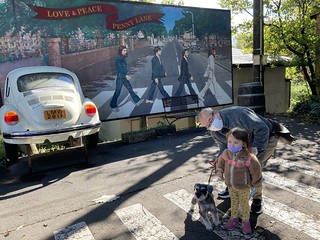 Today is our last day here; we need to check out at 10am. We'll go get breakfast as soon as that opens (7:30am) since we anticipate the place being completely packed. Since everyone woke up at 6am that's not going to be a problem.

Breakfast was pretty full as expected. There were lots of dogs again, which is lots of fun. We had a relaxed (large!) breakfast, checked out, then went back to the cabin. We packed up and bid our farewells to the place - it was a nice cabin for out three days! We dropped off the key and headed out, just around the 10am check-out time.

The first stop was "Penny Lane" a cafe and bakery about 40 minutes from the cabin. It is a really popular place, and we've been there a few times aleady. Since it is Saturday, I'm pretty sure the place will be packed, and it was. There was a line of cars about 10 deep waiting to park. We waited in that line to park, and then there was a very large line (40 or more people?) to get into the bakery. They said that the wait for food at the cafe was like an hour, and this was after the waiting it took to get up to the point to talk to someone. It was so cold, a bunch of us went back to the car (Momo and I and Sakura and grandpa) to wait. Lisa and grandma came back with bread, and we left. We had waited a total of about an hour, so it was 12:45pm by then. We decided to go to a soba shop for lunch, and we also had a bit of a wait there, but not much of one compared to Penny Lane. Lunch was nice, we continued the trend of eating too much - even though I didn't order anything! I just shared with Momo and it was still a lot of food.

I took the next shift of driving, which was about two hours before we stopped at a service area to let Sakura out in the dog run (there were two other dogs that had a lot of fun) and get some drinks at Starbucks. An hour later we were back home, with the car unloaded, vacation done. Back in Tokyo by 6pm or so.

Thankfully we have Sunday left to do laundry, make sure Alan gets his homework done, and try to unpack everything. And we also have some bread from Penny Lane, so that's good.