We usually go to America in the summer for a month or three, but this year due to Corona Virus we didn't go. So we spent a bit of time thinking about safe vacations, and settled on renting a cabin in Nasu, a vacation spot about a three hours drive from Tokyo. A friend of mine is originally from Nasu, and ever since I've met him he's been talking about how nice Nasu is. There are really a lot of "vacation homes" (or maybe timeshares - hard for me to tell) out here, and there are a surprising (for me!) number of large and nice looking restaurants off of the main road. Many places are dog friendly, and have large parking lots, both rarities for people from Tokyo. I could definitely see coming back here on a regular basis, though the drive is a bit far from the part of Tokyo that we are in. We (my family and Lisa's parents, along with their two year old miniature Schnauzer Sakura) piled into our mini-van and drove out there on Saturday. Before checking in to the cabin, we went to a Soba place, "Seiryu no Sato", which has a stocked fishing pond, allows for dogs, has lots of outdoor seating, and is generally quite nice. I had an excellent Curry Soba. It was raining a bit, so we skipped on the fishing - that was the main thing that Alan wanted to do on the trip - and instead went shopping for some vegetables and bread for the morning breakfast. 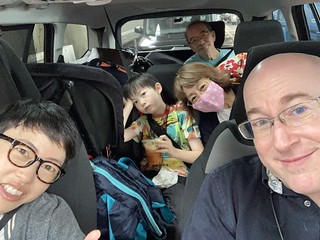 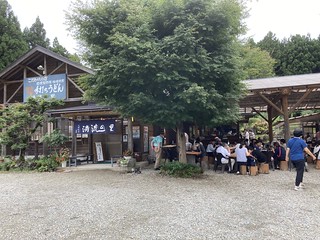 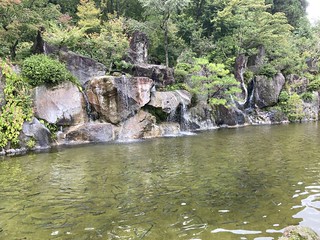 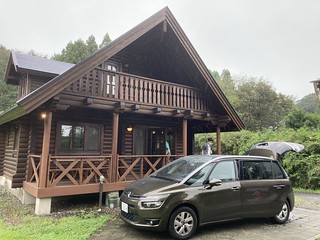 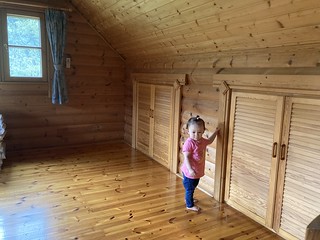 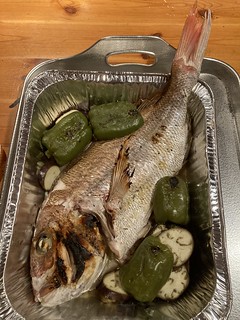 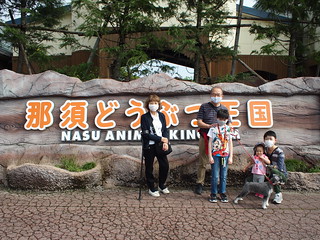 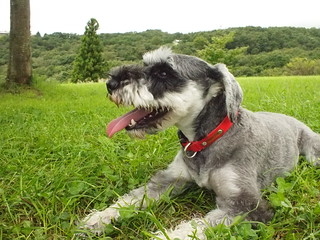 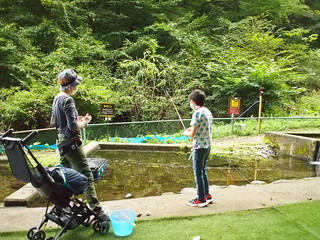 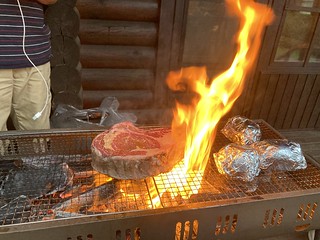 We checked in to the cabin, and started set-up for the evening BBQ. The main dish for the evening was a large fish. It was nice. The cabin itself is nice - on the first floor it has a large dining area with a small kitchen, a small bedroom with two single beds where the grandparents stayed, a toilet room, and a natural hot springs fed bathroom. It is a normal bath, not a special onsen bath, but it still is quite nice, and due to the high sulfur content of the water gives your skin a nice refreshing feel after you get out of it. There is also a porch with dining table and BBQ setup that we planned to use every night.

The upper floor is one large room that we laid out Japanese futons on, and the four of us (Lisa, myself, Alan, and Momo) slept on. Staircases are new to Momo, and the first night she took a nose-dive down the stair case while I was watching her. I turned around for a minute to get something out of my backpack and she ran to the staircase. I wasn't able to get to her before she went down head first. Lisa ran in from outside and got her on the last two steps. She cried a lot, but didn't seem to have any problems with her eyes or when we moved her limbs around. She had some bleeding from her gums, so probably banged a tooth, but a little bit later she was eating happily. You'd think that a kid would learn from that, but on the morning of our last day she also took a spill down the four step front porch (which I was able to catch a bit) leading to another bout of crying. We didn't bring many devices with us - particularly Alan didn't have his tablet that he plays games on, just a Kindle paperwhite for reading books - but Momo took my phone and watched some videos on it which magically healed all injuries.

The second day we woke up early - 6am as always - had a very nice breakfast of many types of bread from the previous day's shopping. The plan for the day was to go to Nasu Animal Kingdom, a kind of Safari park. Momo really likes animals (what young girls don't?) and Alan still wanted to fish, which is possible there too. They have a dog run and place to watch your dog while you go look at some of the animals that they don't want dogs around - presumably because the seals would jump over the fence and eat the dogs or something. We saw lots of animals, and Momo really liked playing with the Otter, who kept coming around and swimming up by the glass near her. The dog run was great - Sakura has never seen such a wide space with so much grass and been off her leash before, so she was running like mad all over the place. There were two or three other dogs there, but they didn't have the energy to play with Sakura. We split up at the dog run, and we took a walk down through a natural path to the fishing area, where Alan caught two Ayu (Alan tells me it is Sweetfish in English based on Animal Crossing, which is right after I looked it up.) As a side note, I know about three types of fish in English, and maybe over 30 in Japanese. My favorite type of fish in English is "sticks".

After catching the fish (took longer than you might think, even for a stocked pond, since this was only Alan's second or third time ever fishing) we grilled them up in the traditional Japanese style on a stick, and Alan and Momo ate them up.

We walked over to the chair lift to go back up the big hill to get to the main part of the park. We had previously taken a bus and walked a lot - and when I say walked I mean mostly that I carried Momo who didn't want to ride her stroller - so we had a long hill to get up to meet back up with Lisa's parents. After we met up, we went around to the other exhibits, which Momo really enjoyed. Of course she wouldn't let us get out of the park without stopping at the gift shop, where she picked up a small Sand Kitten doll that she really likes, leading to many unprompted very loud "MEOWS" from her.

We spent about four hours at the Safari, with perfect timing because as we left at about 1pm, it started to rain. We drove out to the Cheese Garden - which is famous for Cheese cakes or something - and unlike it's Olive counterpart there isn't free bread. In fact, it was so busy that we gave up on trying to sit down, bought some stuff for the car, and ate as we drove to our next stop: Nasu Winery. This place has been in business for 140 years. We talked with the owner (?) a nice older woman, who complained that because of Corona Virus she wasn't able to give us tasting flights. We bought a couple of bottles of wine (6 between us all) and Lisa mentioned that she next wanted to get some vegetables for our evening BBQ. The old woman was super excited about this, and called a friend of hers who was out in their field harvesting some stuff, and after maybe thirty minutes of discussions (what kind of vegetables do you want? how about tomatoes? etc.) it was decided that we would go and meet the friend in their field an hour to get the vegetables that we wanted. They needed to know what we wanted so they could go and pick them for us. We drove back to the cabin, stopping at a roadside stand for some awesome Japanese pears, Lisa dropped us off, and then went to get the vegetables.

The evening BBQ was a big old hunk of meat on the bone that we had bought in Tokyo and brought with us. It was great. We also had one bottle of wine, a $20 (cheap for Tokyo!) bottle of 2017 Merlot/Cabernet/Berry mix that was great too. The onions, yams, peppers, okra, and other fresh vegetables were super fresh and delicious.

The next morning we got up and prepared to leave after a nice breakfast. Check-out time at 10am, then we'll grab some lunch, and drive back to Tokyo. I hope wen can pack everything back into the car - it was full coming here, and we've picked up a few bottles of wine and kitten stuffed animals.

We drove out to Penny Lane, a bakery / restaurant that is dog friendly and has a large outside eating space. The whole place is Beatles themed, and the food is quite good. We loaded up on bread like objects for the next few days, and started out long drive home. Long in Japan is a three hour drive, and we stopped twice at rest areas for restroom breaks and to get some drinks at the Starbucks. The whole trip was a lot of fun, and definitely Nasu is on my list of places to return to.