So I run my own mailserver that serves http://FuguTabetai.com/, http://MangaTranslation.com/, http://SMUGeeks.com/, and http://JevansCeramics.com/. The problem is, even after adding some extra rules to SpamAssassin, it really hasn't done a great job catching the spam, and worse it takes up a lot of RAM and CPU time on my virtual private server. The VPS is from http://RimuHosting.com/, and is really great. Look them up if you are in the market.

Anyway, each email would take about 600 seconds to process. That is a long time, and worse it was really bogging down the other apps on the system, such as this blog, or the forum for MangaTranslation.com.

So what I've done is turn off SpamAssassin, and forwarded the email catch-all for each domain to my GMail account. That has been working very well. Since most of my spam goes to untargetted email addressess, or aliases that I send to the catch-all, GMail catches the spam, and I just have to check my GMail account once in a while to find stuff that got through. Also, I set up some filters on GMail to mark which domain the email came from.

I could take this a step farther, and have GMail forward email that makes it into the in-box back to one of my accounts here. If I did that though, I would need to add a rule to postfix to have it check the header, and deliver any GMail-forwarded mail locally. Right now that doesn't seem like much of a problem, so I'll skip that step.
Blog · Software • 0 Comments

Where in the world are the Evans kids?

My grandmother and mother have a problem. They don't know where us Evans kids are. We travel around a lot, and don't stay in one place for long. So I thought it would be a fun project to code up a PHP / MySQL web application that puts us on a Google Map. Of course, I want to make sure that if I'm going to go to all this trouble it will be a general system, so I did user sign-up and each user can have multiple maps. I have not yet added access control, which is the biggest problem: once you are on the system, anyone can put you on their maps, and all of your maps are visible to everyone. Still, it works pretty well for what I want to do, and I don't think this is going to be a well-known thing so I'm not too worried about privacy concerns. I will try to put in some access control stuff though. The code should be released under the GPLv2 once I get around to packaging it up. It is my first PHP coding project, so it is probably pretty ugly, but since I use Smarty (also my first time with that) and ADODB for database abstraction, I think it should be reasonable. Check things out: Where in the world Are the Evans Kids?
Blog · Software • 0 Comments

I've added simple comment spam protection to my bblog. Hopefully it will keep the spam bots from getting comments in that I need to moderate. I'll put installation instructions below. 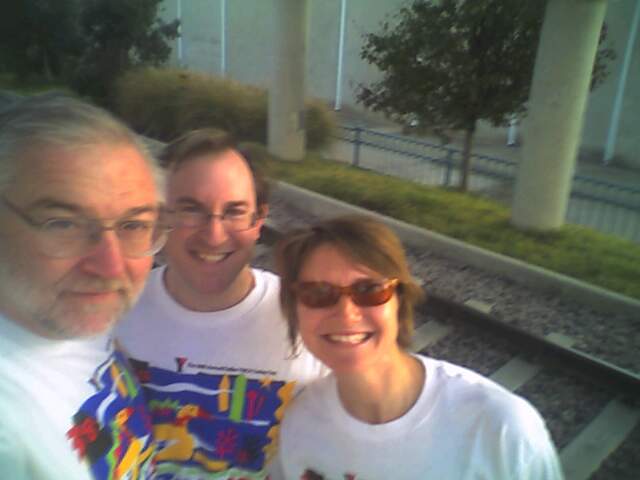 On Monday the 21st I arrived in Dallas from Tokyo. The flight went well, in particular since I requested a seat with a power plug, I was able to use my computer for about four hours, and the flight seemed to go quickly. On Tuesday, I drove down to Austin to pick up Alana, and Wednesday we loaded up her can and drove back to Dallas. On the way we picked up our registration packets for the 2005 Dallas Turkey Trot fun run. Alana, Dad, and I were going to run the 5k fun run on Thursday morning. We got up at about 7am on Thursday so we could catch the 7:15am DART train from Parker road. We figured that would be easier than driving downtown since there was supposed to be a lot of people showing up for this race. We missed our train by about two minutes and had to wait about half an hour for the next train. Lots of runners were showing up in the mean time. We were able to get a seat on the train, and boy were we lucky. But the time we had gone three stops, the train was packed with runners, and by the time we hit Mockingbird station there was no room for people to get on. (Or so they thought, a normal Toyoko line late night train would be at least twice as packed.) We made it to the run, and there were 24,000 people there. It was packed. When we started our race it took about 6 minutes to get up to the starting line from where we were lined up. We all stuck together and took the run slowly, it was lots of fun. It ran right through downtown Dallas, and went by lots of historical points in Dallas. I made a Personal Best slow time at 51:50. Afterwards, we had thanksgiving dinner which was nice. Our stove broke, so mom had to run out and buy a broiler for $30, and we cooked the turkey in that. It turned out fairly well, and probably we'll use the broiler for a while since it is very expensive to get a new stove.
Blog • 0 Comments

So I turned 31 today, in Japan. This is the second birthday I've had in Japan actually. Last time I was here for a conference in 2002 I believe, and it was not memorable. I believe that I bought myself a cup-cake at a convenience store or something. This time, I had a memorable birthday. I met F. at Shinjuku for lunch, at "La Boheme Cafe", which was quite nice. After that we walked to the governmental building, which is constantly being destroyed by monsters in movies. We did some window shopping, and then came across a blood drive. I've been meaning to give blood for a while, since I don't know my blood type and would like to have it typed. Also, I like the idea of helping out people in need. One reason I'm interested in knowing my blood type is because in Japan, people believe that one's personality is indicated by blood their blood type. I've been asked what my blood type is many times, and I never know. People are shocked. Anyway, I donated blood, and it turns out I'm type A. Sounds good to me. Now I know, and knowing is half the battle. It's a birthday I won't soon forget!
Blog · Japan • 0 Comments

Fumie and I went to a large Ikebana show at the Takashimaya in Nihonbashi on Sunday.
Blog · Japan • 0 Comments

Trip to Hiroshima, do I have to change this website to FuguTabeta.com??

On arriving at Hiroshima, I met with Professor Hidetsugu Nanba (難波 英嗣 先生) for a very, very nice dinner. We ate at a place called きっ川, proprieter 吉川 修平 (Kikkawa Shyuuhei). It was a fresh seafood restaurant, small, and with a very nice personable atmosphere. Every dish is described and explained by Mr. Kikkawa before you eat it. I really enjoyed the dinner, it was just excellent. We also had a nice local Sake with the dinner, 雨後の月 (Ugono Tsuki).

The first course was a nice Sashimi, and then there was a baked fish and a stewed fish? There was a great tempura course, and as Mr. Kikkawa explained, the anago (conger eel) was caught earlier that morning by Mr. Tiger, a famous Anago fisherman in Hiroshima that has been catching them for 40 years. It is said that he catches the most delicious Anago. It certainly was delicious.

The next course was a soup with many interesting things, mostly mushrooms and oysters, but there was also Fugu. Yes, Fugu. The namesake of this site, which I've been running since about 2000, but of course I've wanted to try Fugu for much longer than that. Maybe I first heard of it in 1996, in my first long trip to Japan. So, I had the Fugu, and it was delicious. Now, do I have to buy the domain FuguTabeta.com?? (FuguTabetai means "I want to eat Fugu", FuguTabeta would mean "I ate Fugu".)

So if you are ever in Hiroshima, I highly recommend Kikkawa. The phone number there is (082) 241-0002, but you had better know Japanese if you call there. It is a small place, so reservations are recommended.

I arrived in Japan August 24th, 2005 to start my job hunting activities. I also installed bBlog on FuguTabetai.com, and I think it is quite nice software. I should be able to post a bunch more because this automates a lot of what I was doing by hand.
Blog · Japan • 0 Comments

Thanksgiving at my place. I even cooked a Turkey, since both of my sisters came here!
Blog · Food • 0 Comments

Carl Sable had an Internet-themed Halloween Party. Click on the thumbnail to check out my pictures.
Blog • 0 Comments

My best friends Ron and Michelle got married at Princeton University October 23rd, 2004. I have the pictures here to prove it.
Blog • 0 Comments

Six years in the city, and this is the first time I've ever been to the annual Macy's Flower Show. Pretty amazing actually.
Blog • 0 Comments

My younger sister graduates from SMU with a Bachelor of Fine Arts in pottery. She had her first solo show, and then was in the graduation ceremony.
Blog • 0 Comments