Capcom is running a Street Fighter League Pre-Season in Japan. They have the details on their main JP SFL site. I wrote a bit about this in a news update blog post, and thought I would write a post that I can update focusing on the JP Pre-Season. Basically, there is a 3,000,000 yen prize pool (about USD $28,000) up for grabs. It isn't clear to me yet what the final tournament will look like, but it will have 12 people in it. 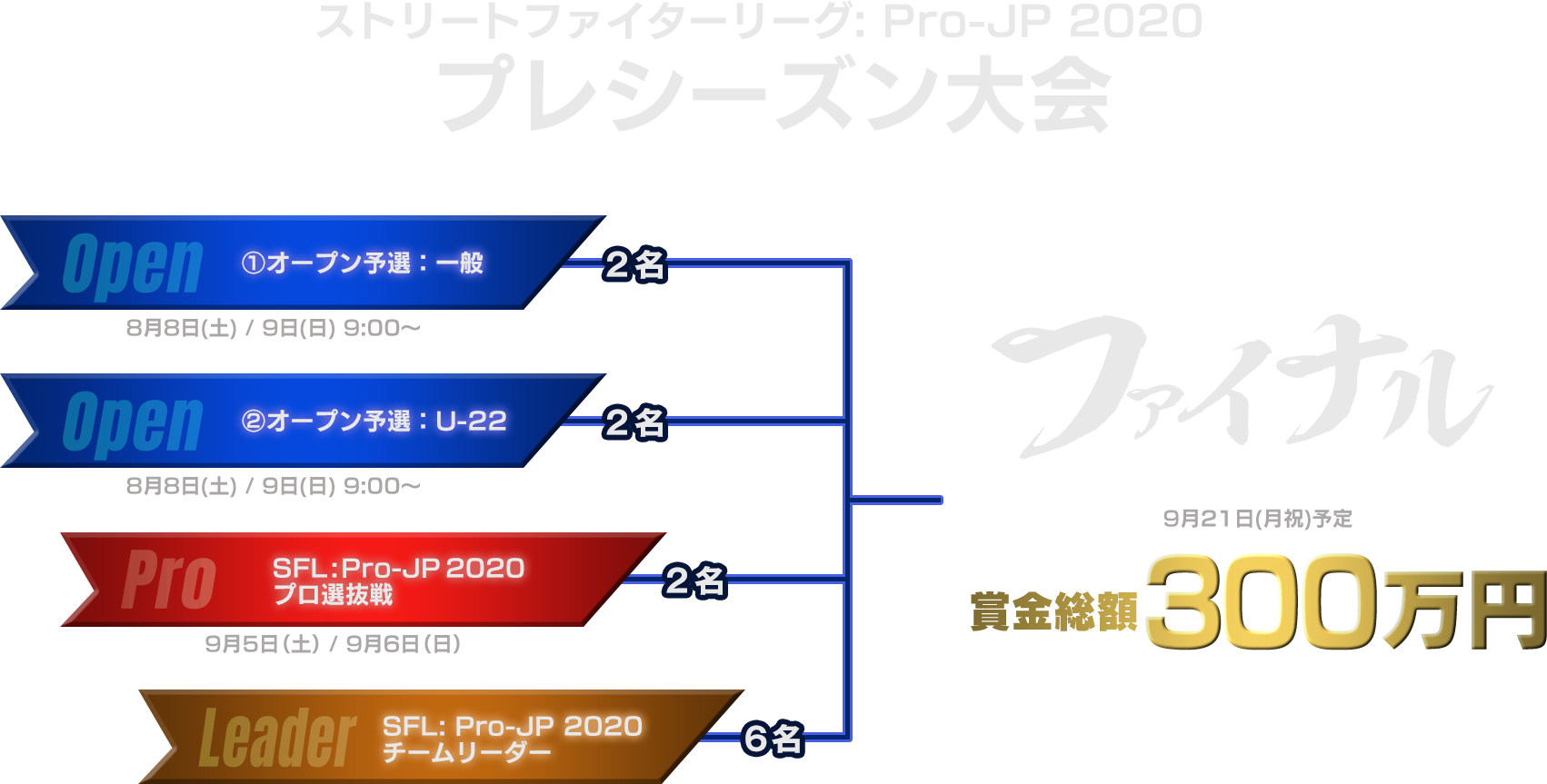 There are four blocks each for the unrestricted open and under 22 tournaments on day 1 and day 2. You can join both day 1 and day 2 tournaments, unless you are the winner of one of the day 1 tournaments. The block tournaments are first to two, single elimination. The top two of the block make it into top-8. The top-8 for each tournament (unrestricted open, and under 22) are first to two double elimination tournaments. The winner will advance to the final tournament September 21st. There are two winners each day, one from the open bracket, and one from the under 22 bracket. Combined over the two days, there are four total people from the open bracket.

On September 5th, there will be an invitational Pro tournament with 18 people to select two pros to join the final tournament. I haven't seen further details on this so I don't know about the type of tournament or who is invited - though I suspect it will the usual group of JP based pro JeSU license holders, excluding the team leaders who have already been announced (Daigo, Momochi, Fuudo, Nemo, Mago, and Tokido).

I haven't seen details on the final tournament yet either, but it will include 12 people total: the six team leaders, two open bracket contestants, two under 22 contestants, and two pros that are not team leaders.

Coming out of the Under 22 on Day 1 Kudo took out Shinobism Higuchi in round 3 of block 2, surprising many (myself included.) Jojotaro, an Akuma I've seen around a bunch, made it into Top 8. Kudo (Chun-Li) won the U-22 tournament on Day 1, earning his spot in the final tournament. The stream was mixing open bracket and under 22 matches, but went to all under 22 from the top 8 (and mostly had under 22.)

First match I saw on stream was from Block 1, Okumura Mami vs. Akutsu. If you don't know Okumura Mami, she was in the 2019 Spring Street Fighter League powered by RAGE on Nemo Aurora. She's been very involved in Street Fighter related things since them, streaming often, she just recently ran a three day "fight 100 Zangiefs" event (she doesn't like Zangief) and often does commentary in Japan for Capcom events. Sadly, she lost with her Blanka in the first round, but I was cheering for her. In Block 1, Eita made it out on the back of his Seth. Crusher Birdie lost in round 4, and YuzuPonzu Dictator made it out.

In Block 3, surprising me, Trashbox lost in his first match (round 2). Kin-devu lost in round 3, and Naoon and Persia made it out. Naoon has beat me in pools of every EVO Japan I've been to (only 2 of them, but still.)

In Block 4, the match-up between Vanao and Jyobin in round 4 was amazing. I thought Vanao played a complete jerk Honda and was amazing fun to watch. Gunfight made it to round 4, but lost to makoto, who then lost to Nari-kun. Vanao and Nari-kun made it out of block 4, setting up the top-8. Vanao was impressive, playing Laura, Honda, and Boxer in the tournament.


No-motion Hoshi no Ko (Honda) lost in the first round in Block 3. In Block 4, his partner No-motion Yano played Ed and made it to round 3 before losing. If you haven't heard of No-motion, you have probably seen them: they are a comedy duo that sometimes dresses up as Street Fighter characters (usually Ryu and E. Honda) and does skits. Yano's Ed was quite competent.

Kenpi's Ken took the finals, give it a watch - it's quite nice!

In the U-22 bracket, in semi-finals Kobayan lost to Higuchi, and then he went on to fight back into grand finals. He lost out in the end, but it was a good run.

In Block 7, Kin-devu lost in his first match, Jyobin lost in round 4, Gunfight lost in round 4, and Mega-Kachyou (a local Abigail) lost in round 4. Shinobism Ohtani (Akuma) and Naoon (Akuma, who as I mentioned earlier, consistently beats me in EVO Japan) both made it out.

In Block 8, we see No-motion Hoshi no ko (Honda) lose in his first match, so the comedy duo doesn't get far today. Trashbox reverses his fortune from Day 1 and makes it out, beating Eita in the Semi-finals.

The top 8 was won by A.M.G. Yu-sama, congratulations!

This was a round robin tournament over two days with two groups. Moke won group A, and Fujimura won group B. The VOD links for the entire day 1 / day 2 are in the schedule and stream links table, you can also get individual matches off of Capcom Fighers JP YouTube Page. Really great matches, I highly recommend watching them.

This will be streamed September 21st 18:00 JST. See The Capcom Site for information, but in short:

The archive is on Capcom Fighters JP (in Japanese). Definitely check that out - it was a great tournament. Since there were 12 spots in the tournament, four of the spots had shorter paths to the final. This is a single elimination tournament, so it is just one and done. The two Under-22 winners, Kudoh and Higuchi, both were first to choose their spot in the bracket. They both chose (obviously) paths that were shorter. The rest of the participants then were selected at random, and chose a spot. The next two selected, Kenpi and Nemo, also both took the shorter routes. That resulted in this final bracket:

If you don't have time to watch the whole tournament, definitely check out this great Just Frame Analysis by HiFight of the Daigo - Higuchi match.