The weekly SFV local at Akihabara eSports Square, called Fighter's Crossover Akihabara, had its 200th anniversary last week. There was a special event for it, with pizza, games, and giveaways. I wrote a bit about it.

Kagecchi, the organizer, tweeted some pictures from the event below. 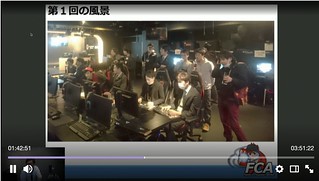 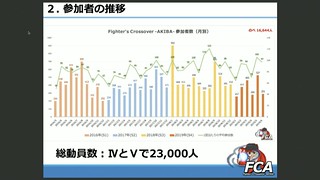 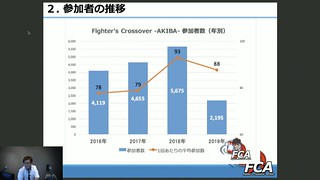 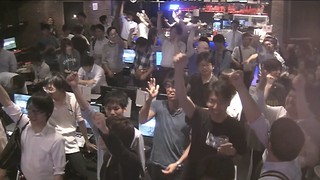 Fighter's Crossover -Akiba- (FCA) is the weekly Street Fighter local held at Akihabara eSports Square (the venue) on Wedensday nights. There are a bunch of options for playing Street Fighter in Tokyo now: there is always the arcades now that Street Fighter V: Arcade Edition: Type Arcade is out. There is FCA on Wednesday nights usually, and Level Up Thursday at Red Bull Gaming Sphere in Nakano on Thursday usually, Game Bar Bridge in Tachikawa usually runs SFV on Monday, Studio Sky will often have open training sessions on Friday and Sunday, and Shot Bar Lucy runs an all night party on Friday with SFV, and often there are community run events there for SFV on the weekend. There are also begginer focused events like the Syogepi- events and ones by Nanago.

So there are many options. Given that you need to pay a cover charge for the FCA events, and it is free to stay at home and play ranked, I always wondered what would happen as time went on and these other options for SFV started to show up. I only found out about the place maybe two years ago or so (thanks to the The Jump In Podcast and Kim1234 All Day), and back then it was the only place to play SFV in person more or less.

So, on June 26th, FCA was held for the 200th time. It was a special setup, with food included in the 2000yen cover charge - normally you get a drink ticket or two. Casuals all night, and Kagecchi, the organizer, gave a little talk about the event. I've taken some slides from the stream and added some commentary.

Kagecchi gave a brief history of events he's been involved in - he's been holding events for about 20 years now, which means he started in his teens. In 1999 he ran a 3rd Strike event in Tsukuba, where 27 people came. He's been on the staff for Tougeki, ran a SF4 tournament in 2010, and heard in 2015 that there wouldn't be an arcade version of SFV. In Feb. 2016, he started negotiations with Capcom and Akihabara eSports Square. March 9th, 2016 he held the first FCA event, 33 people came. April 2017 he received an official license from Capcom to run as a Community event. FCA has official permission from Capcom to use SFV, and Kagecchi can officially use Street Fighter characters in promotion material. The license did not come cheaply. He talked a bit about how things were set up originally - side to side instead of head to head - and had some graphs with numbers around how many people come each time. There was a drop off from season one to season two, but then right around the first EVO Japan there was a very large jump. The attendance numbers have really been holding steady, and that is despite more options opening up for people to play SFV.

My clickbait analysis of these graphs would go something like: Is Street Fighter V dying? The answer: No! There is a steady year over year growth! Things are looking fine! The game is fun, people enjoy coming together to play it, and there is no reason to panic. In fact, there's no reason to even talk about games and popularity; just play what you enjoy and have a good time. It isn't a popularity contest, but based on this local (that puts out numbers!) things are fine.

He also talks a bit about the future - FCA will continue. He was thinking that he'd stop, since the arcade version came out, but since people have kept coming, he'll continue. He's changing the Beginner and Intermediate tournaments to "Under Diamond" tournaments. If there are 4 or more people under 30k LP, then they'll run a tournament just for those people too. He wants to provide something for people that are new to the game and just starting up (or like me, bad, or don't have the time to play a lot.)

He's going to stop the random 3-3 tournaments, mostly because the team battle mode doesn't let you change your V-trigger when you win. Instead he'll run a "Under Master Level" tournament as motivation for people who are Platinum or Diamond now, to give them something to aim for. The open ranked battle tournaments will continue, still with the FT1 rules to help people improve their FT1 power.

He also says he wants to do something with a "Masters League" for higher level players, but with all the stuff he's doing, and how at work he's been found out (and started to do eSports stuff there too) he doesn't have time. He warns people about being found out at work. I think one of the reasons NTT has been involved in more fighting game stuff (EVO Japan sponsorship, some other things) is due to his work behind the scenes.

He closes by talking about how if people want to get involved in running events, he's happy to talk and give advice. He also says to talk with him if you have questions about different pro teams, or work life balance (I don't think he has much of that, given all the work he puts in for FGC stuff!) He also thanks all the people, and particularly the people that help out with FCA.

Team Grapht provided 10 (!!) Pantera EVO edition sticks, and those were used as prizes in mass rock paper scissor contests. There were also prizes from Creative Media and IO-Data. The rock paper scissors stuff starts at about 2h 33m in on the video. People got super excited for the Pantera EVO sticks at about 2:39. He got Pugera to run the first one, then MOV, and Kagecchi mostly did the rest. It was lots of fun.

One of the winners was Oaminyandamaiza, a Juri main and cosplayer. She was super happy and posted some stuff up on twitter later on, reproduced below (with permission). She said that she will start streaming in the latter part of July, so if you are interested give her a follow.

Oaminyandamaiza (a cosplayer and Juri fan) was super happy to win one of the Pantera Evo editions in the rock-paper-scissors competition.

I really enjoy the FCA weekly, and highly recommend it if you are in Japan. I can't make it every week, but I look forward to it when I can, and I'm always happy to say hi, chat a bit, and run some sets. I've made some friends at FCA, and stay motivated to do more stuff in the FGC because of it.