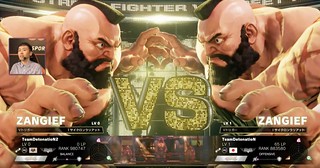 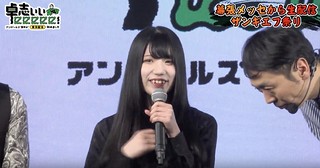 On the first public day of the JAEPO (Japan Amusements Expo and part of Tokaigi 2019 Game Party Japan out in Makuhari Messe exhibition center, there were lots of video game, and more importantly to me, fighting game related events. One of those was the "Zangief Festival" set up by the TV Show Ariyoshieeeee (broadcasts Sunday nights at 10pm on TV Tokyo) and Detonation Gaming on the AU Stage. It was streamed on Youtube (see below for links to the video), but was essentially a festival of all things Zangief. I took a few notes below.

Interesting points in the video:


Aru is the MC. He introduces Itabashi Zangief, and Tanaka Ungirls from the TV show Ariyoshieeeee on TV Tokyo, Sunday nights from 10pm. He started playing a few months back for the TV show, but is confident he can get out SPDs. He tells the crowd he will absolutely beat them all up - the deal with this is that they talk about Zangief, and get a lot of Zangief mirror matches in with people from the crowd. Aru asks Tanaka to tell the streaming crowd something, and he yells out "All of you on stream! Get your ass over here and I'll piledrive you!" He's certainly got energy.

Aru asks Itabashi Zangief about what good qualities Zangief has. ItaZan talks about how he's been playing for 20 years and enough that he's named after him now so… He says that actually he was playing a different game (it was Virtual Fighter back then) but people called him that just for fun. Apparently because he used to have a lot of muscles, because Tanaka butts in and says that he doesn't have much muscle power now. ItaZan protets that he used to. Tanaka says he likes Zangief because of his win quotes and gives out a few examples, all from SFV.

Aru tells everyong that since it is a Zangief Festival, the only character that will be used is Zangief. Tanaka makes some jokes about a little kid in the crowd ("can even that little kid play Zangief?") Tanaka jokes around about how Zangief is weak because when he fights Ryu, Ryu just stays away and chucks fireballs. When he finally gets in and does a double lariat, Ryu jumps away to the other side of the screen again.

Itabashi talks a bit about back in the day when people who didn't like characters that throw would come, and complain, even before he picked Zangief! - about the character. And sometimes a long time ago, if you threw too much people got mad, and might come around the machine for you. Not any more though. There is a lot of back and forth talk, which is fun and enjoyable for me, but nothing super interesting that I would like to actually write down here. Some of Zangief's moves, Tanaka really likes his Critical Arts, etc.

They start to set up for some Zangief mirror matches, and somehow Tanaka messes up his station. ItaZan comes over and fixes it up for him (what a nice guy). The issue was they are on the PC, which if you don't know, switches the confirm and cancel buttons, so he probably backed out of everything to the main screen. ItaZan of course chose VT2 (the better VT in the mirror match for sure) and beat Tanaka. He ended the match with a bunch of SPDs, and Tanaka asking about how he did that, and how he can get out. ItaZan says he can jump, which he did once, and ItaZan got an air SPD on him that time. They set up a rule where ItaZan can't move for five seconds at the start of the round and run another set. At the rate Aru counts, you can get a dizzy in five seconds, which makes it actually pretty tough on ItaZan. He almost brought back the first round, but lost in the end.

Next, they invite Zangief mains from the audience to come up and play against Tanaka. The first contestant is a third grader (9 years old), and ItaZan helped him out a bit. The kid normally plays Zangief he says, and thinks he might be able to beat Tanaka. If Tanaka loses he needs to answer any question that people ask him. Tanaka beats him handily the first round, and goes very easy on him the second round. Of course he takes the third round.

Next up is a big guy (180cm, compared to Tanaka's 188cm) called Kuma. Zangief is his secondary char (Sagat main) and he isn't too confident but wants to give it a go. Tanaka takes it in a bit of a close match. Kuma says that he was nervous and couldn't get his moves out.

Next up is a woman, Honoka Hatsuya an Idol from group Guguru. She said that in high school people used to tell her that she looks like Tanaka. They re-instated the rule about Tanaka not moving for 5 seconds, which gives Honoko an advantage, but she doesn't have too much experience with SFV, mostly through out some normal moves and jumping. Aru jokes around that Tanaka can beat kids and ladies. Tanaka accuses her just coming for publicity. It's all in fun, and everyone is having a good time.

Next up is Shika, an Ed main, but he wants to finally beat Tanaka since he's been winning all these matches. Tanaka beats him, but it was a bit closer. I definitely could beat that guy, but I've played ItaZan enough to know that I've got no chance there.

Shuu is next up, he's played for a few years and is a Mika main. He looks like he knows what he is doing, plays a bit of neutral and has some combos. He dizzied Tanaka, and popped VT2 to finish him off, getting some compliments from ItaZan, who starts to get into the commentary with this match. Tanaka finally loses! As a reward he gets to ask a question, so he asks Tanaka who his favorite SFV character is. Tanaka asks if he is keeping it specific to just the female characters (that isn't the case) but he says Chun-Li. He seems like he's trying to get into some racy jokes or something.

For the last match he asks for someone who is a strong Zangief main, and if they beat Tanaka they will face off against ItaZan. Man, I totally could beat him, I wish I could have gone. I've played ItaZan enough to know that is a lost cause though. Nobody volunteered for that, and then just asked for someone who plays Zangief. Kuromayo comes up, and says that he's played Zangief in SF4. Aru asks if he's played ItaZan before, but he hasn't (and was surprised at the question!) If you want to play ItaZan, he does come fairly regularly to the Wednesday night Fighter's Crossover local, so it isn't that unusual of a question. Tanaka takes it pretty easily, unfortunately. Man, none of the local Zangiefs from FCA showed up, they totally would have wiped the floor with Tanaka. (I'm easily the worst Zangief that goes there regularly.)

Tanaka called out for Shuu to come back up and play ItaZan since Shuu did beat him. Shuu hasn't played ItaZan before either. There is no way he'll win, but ItaZan might keep it close for the drama. Then again, he's never done that on any of the AbemaTV shows that he's on, so we'll see how it goes. Nah, ItaZan played it straight. It can be a bit hard with Zangief to tell - but he's whiff punishing stuff and applying frametraps. Shuu did get the second round, but not the third.

That ends the Zangief Festival. Lots of people came, and Tanaka says he had a really good time. ItaZan says he looks forward to seeing Tanaka at a tournament. Tanaka gives a bit of advertising for the Ariyoshiiii TV show, the next one on Sunday (at midnight or so on TV Tokyo I think) will feature them playing SFV.