There has been a bunch of random news out of Japan that I've wanted to talk about, but I haven't had the time. I try to tweet something every once in a while when I see something interesting on twitter, but I can't always keep up.

So here is a post with a smattering of interesting news I've seen about SFV in Japan lately. 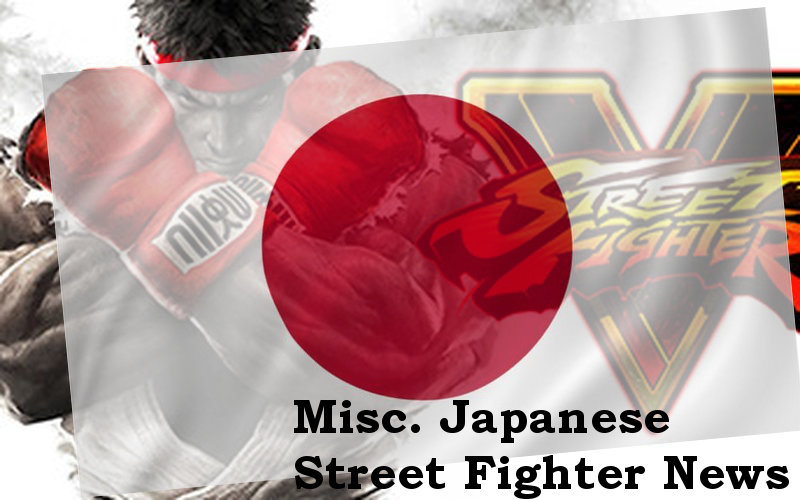 Back on December 13th, JeSU posted about a variety of things they are up to. JeSU is the Japan eSports Union, which is a committee of people from eSports game IP owners and some others in the industry. They control who gets a "pro" license which you need in Japan to compete in tournaments that have a large prize. This particular press release has three major portions:

2 Yomiuri News article about a Capcom Pro League in 2020

On January 1st, the Yomiuri Newspaper reports about Capcom running a six city league in 2020. The gist of the article is that Capcom is the flag bearer for eSports and is leading the way. Similar to how the Japan Soccer J-League has a "Home Town System", Capcom is looking to go forward in that approach. I don't know much about this kind of thing, but it is different from say a pro sports license franchise based on reading a few Japanese wiki articles. While a franchise system usually the league owner has a monopoly on the matches and related performances, the home town system has the individual teams make agreements with the local businesses and there isn't a monopoly on control of the events from a higher organization. The article says that Capcom has been putting a call out to local businesses and organizations for their support. They talk about the Capcom Rookie Caravan event where Capcom visited six different areas in Japan and held and event there. The six areas were Saga-ken, Hiroshima-shi, Aichi-ken, Kumamoto-shi, Morioka-shi, and Sapporo. They speculate that these are the candidates for six pro teams. They say Capcom is very interested in eSports, and plans to expand to double the number of teams in the future. Of course the game is Street Fighter, which they say has sold over 41,000,000 copies in the series overall worlwide, which I guess might be true for all Street Fighters. The Yomiuri Newspaper is a major National newspaper in Japan, so this was really interesting to see.

While that article is forward looking, Capcom has already started a 3-3 team league with six team - mostly Tokyo Based as far as I can tell - this year. I wrote a bit about the team selection process for the Beginner Class. Each team will have one member from the Beginner Class - literally people who have just started playing SFV - one member from the High Class, high level amateur players, and one player from the Extreme Class. The Extremem class is one of Itabashi Zangief, Tokido, Fuudo, Mago, Daigo, or Nemo, which is one reason I'm pretty sure the league is totally Tokyo based. There is a selection process for the Extreme class as well, which has been shown broadcast both on National TV (TBS's Onegai! Ranking show, albeit at a 1am time slot) and streamed on AbemaTV.

The linked episodes are free to stream, so check them out if you are interested. The final episode should stream on Jan. 12th, and the Street Fighter League is scheduled to have their draft at the end of January, and I believe start play shortly after that.

January 4th, Momochi announced that Shinobism got a new sponsor. I wrote a very brief tweet about it: "Shinobism landed a new sponsor in Takeya, a plastics maker focusing on drink bottles, food containers, baby products, and other things. Good to see the Shinobism teams (30 ppl in all) continue to pick up sponsors!"

I am continually impressed by what Momochi and Chocoblanka have been doing with Shinobism. Not only has Momochi continued to play at a very high level, but they have set up a major eSports facility with their Sky Studio, and between the four teams that they have, they are sponsoring 30 different competitors and streamers. Two of their four teams focus on giving more exposure and opportunities for women in gaming, and they have done other interesting things like sponsoring a 5th grader for their Splatoon team. Taking an organization lead is not always as glamorous as being a well-known player, but it is very important to the community, and very difficult to do well.

Bloomberg News Japan posted a video about NLBC. It is all in English and is only a few minutes. iDom and a few others show up.

Just a final note. OpenRec has been running a SFV focused show every Thursday for a while now where they bring on challengers to beat a couple of pros. On one of the last episodes before Capcom Cup, Gachi-kun was the challenger. He took out Hatsume in a FT2, then took Mago in a FT3, and finally, beat Tokido in a FT5 for about $10,000 USD or so. You can watch the whole thing here - it starts off with Takeuchi Jon running the challenge before Gachi-kun goes on. You can watch all the past streams here under the "今すぐ視聴できる" heading, but you might have to click the green see more (もっと見る) link to see everything. I remember watching that live and thinking that Gachi-kun was really strong. It was probably filmed a week or two before it was streamed, but even though, in retrospect it is a really interesting set.