A report on the signing ceremony for the "Japan and Saudi Arabia eSports Match" agreement.

4gamer.net posted an article about a new Japan - Saudia Arabia eSports venture that will take place in January 2019. Ian Walker started an interesting twitter thread about the FGC and taking money from Saudi Arabia. I think he has a good point there, but since this is the second time I've seen someone talk about this article, I thought I would put up my translation here so people can see the source, and then talk a bit more about the implications.

My translation follows. As always, all mistakes are my own, I'm not a professional translator, etc. I haven't done any real editing on this, and it is a bit rough in places.

1 A report on the signing ceremony for the "Japan and Saudi Arabia eSports Match" agreement. A total prize pool of $270,000 USD will be used for tournaments to be held in January, 2019 for "Street Fighter V Arcade Edition", "Winning Eleven 2019", "Tekken 7", and others.

The Japanese eSports Union (JeSU) held a signing ceremony today, 2018-08-16, at the Dentsu headquarters for the "Japan - Saudi Arabia eSports Match" agreement. The JeSU chairman, Hideki Okamura, and the chairman of the Saudi Arabia eSports Union, Prince Faisal bin Bandar Al Saud, attended the signing ceremony. The agreement covers friendly matches that will take place in January 2019, and they presented the schedule for the event. 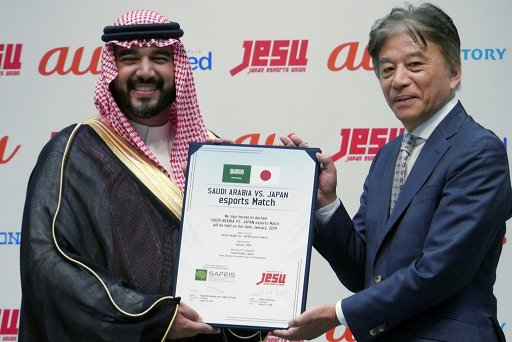 Prince Faisal is an ardent promoter of eSports, and even attended 2018's EVO Japan fighting game event incognito. He has deep connections to Japan, being a key figure in the Arabic production of the Sasuke Ninja Warrior series and the Arabic Takeshi's Castle series. 4Gamer interviewed him at EVO Japan 2018, so please check that out if you would like more information about him.

The "Japan - Saudi Arabia eSports Match" is an event that will be put on by JeSU and the Saudi Arabia eSports Union. There will be one tournament in each country, a home and away event for each country. The plan is to hold the event in Saudi Arabia on 2019-01-18 to 2019-01-19, and the event in Japan will be on 2019-01-26 to 2019-01-27. The games that have been decided so far are "Winning Eleven 2019", "Street Fighter V Arcade Edition", and "Tekken 7". According to Mr. Okamura, they plan to run other games as well. The total prize pool is $270,000 USD, and the process for selecting representatives (players) will be announced at a later date.

Mr. Okamura says "This collaboration between Saudi Arabia and the gaming power of Japan is an excellent opportunity to help development of both countries eSports scenes and deepen friendship between our countries. It is also offers a new venue for eSports competitors. I would like to work with all my effort to move towards success."

Prince Faisal said "I think this is a great opportunity for both our countries to build ties through this competition. In the future the Saudi Arabia eSports Union will financially support the gaming world, and offer up the largest stage for eSports competitors. This is a step towards advancing eSports culture, and I believe that both our countries will be able to continue this fabulous relationship that we have started here" emphasising the ties between Japan and Saudi Arabia.

Both parties position this tournament as a first step towards further development for eSports, "while it may take some time, but I would like to work to develop tournaments that competitors from the Middle East and Asia can attend" (Mr. Okamura), "This tournament will not just further the relationships between Japan and Saudi Arabia, but a step towards showing what National eSports teams can do. The eSports competitors are high quality individuals, and this is also a good step towards turning eSports into an Olympic sport" (Prince Faisal) they both talked about their vision of eSports after the tournament. 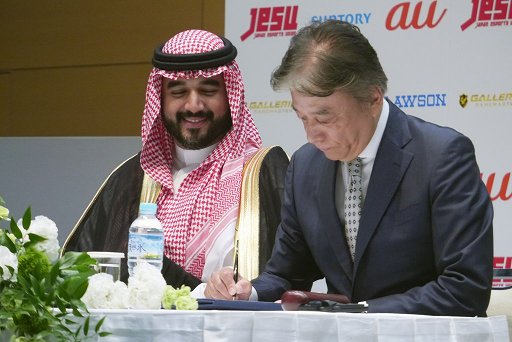 The was applause after the agreement was signed.

Concerning the development of eSports in Saudi Arabia and other Gulf states, Prince Faisal said "because these excellent competitors and top teams have worked so hard, name recognition has improved. I'm the chairman of the Saudi Arabia eSports Union but it isn't possible for me to work on eSports development on my own, it is important to let others in our region know about our Pro players and all the people that are energized by this". The three titles that were announced for the tournament are said to be popular in Saudi Arabia, and according to Prince Faisal "even though our countries are far apart, they are similar to each other".

This isn't just a competition of skills, but because the two countries are far apart and have decided to hold a tournament, it can help deepen our friendship, and we can expect that it will be a meaningful event.