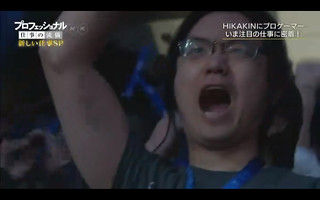 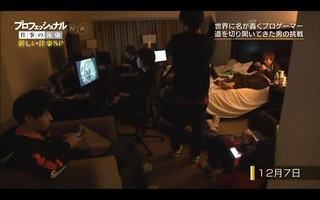 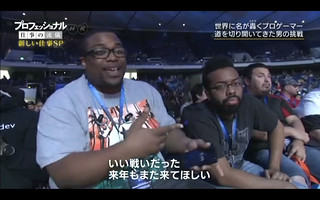 NHK aired a special in their series on jobs about new types of jobs, with a focus on a YouTuber and Professional Gamers.

I'll summarize some interesting points for the Pro Gamer section, which featured Diago Umehara. The YouTube portion followed Hikakin, who I didn't know anything about. Interesting guy, but I don't think people reading this blog are interested in that as much as they are Daigo. ;-)

I didn't realize it, but they introduce three books that Daigo has written (links to books on Amazon Japan in Japanse):

The story opens with a discussion of Daigo's daily schedule. He goes four times a week usually to a place where pros and high level amateurs practice. We get shots of Verloren, Phenom, Tokido, Fujimura (I think), and Luffy there too, so I'm curious when this was filmed. Now I know why on twitter a few people were joking about NHK letting the cat out of the bag on a secret training facility. Verloren says that Daigo's play always changes, and it is hard to predict how he will play. Others say that Umehara's play is very unique, and it is very difficult to imitate what he does. They show Tokido and Daigo running sets as Akuma/Guile, and say that Daigo gets beat up pretty bad losing 3-0 (again, now I really wonder when this was filmed).

They visit Daigo's house later on, and show how he labs up the Guile/Akuma match looking back at how he lost. Daigo talks about how the previous night he was thinking about how he could go more on the offense in the match, but that Guile's character concept is not built that way, so it is difficult. They explain Akuma's character concept, that he is the most powerful, but that Daigo doesn't use the most powerful character, and how he is better on defense. Daigo talks about how you have to search for answers in matchups like this, and explains that if you put a lot of time and effort into it you can find interesting things. Things that the developers of the game did not intend or hadn't thought about. You have to think of different and unique ways to use the character's tools. Discovering those things is very fun for him; it is fun to use a weaker character in unexpected ways. They spend a lot of time showing Daigo countering various Akuma moves, getting the distance right, whiff punishing.

Daigo say that one of the most important things for a pro gamer along with winning is entertaining the audience. The "goal" of his "job" is to entertain the audience and to satisfy them [TL: could also be "to let them understand"]. You have to think about how the people watching will feel.

Daigo: Usually these are moves that you can't counter (Akuma's cr. medium kick). But if I am able to punsih that consistently, it will be an original playstyle and people watching will also be excited. He also explains how the timing is tight - about one frame, and the show talks about that a bit.

Interesting tidbit [TL: I debated whether this is worth talking about, but eh.] Daigo says that he used to have big eyes when he was a kid. But he plays a lot of games, and the more he plays, the more he squints his eyes from looking at and concentrating on the screen all day. So he talks about how his eyes are more narrow now. Also, he has to stop his training mode practice because his eyes have just had enough. [TL: As a programmer, I'm with him on that one.]

They head back to the secret practice place in the evening and wouldn't you know it, Tokido is here. [TL: Important for the narrative.] They played again, and Daigo lost again, but others comment on how his play changed. They cut to Daigo talking with "a young player" who wants to change to a stronger character because he hasn't been winning lately. He tries different tactics, but still can't win. Daigo tells him there is still purpose in that. He then talks about things that are much more abstract to me - what is important is that you know who you are, how much effort you put into things, and what is important is how you interact with people and what sort of influence / impact you have on them. [TL: Every time I see Daigo in things like this he always gets abstract and talks about bigger concepts than the game.]

Daigo goes to his parent's house, and they talk about Daigo's life as a kid, and how his parent's didn't think being a pro gamer could be a job. Read his book The Will to Keep Winning for more on that (that link to Amazon.com, in English, and I'm not making referrer money off this). The program talks about Daigo's past achievements and how he got into fighting games. They talk about his work as a nursing assistant, and how that is an important job, but not something that put his skills and thought process in the spotlight. Then he started getting back into fighting games, and was invited to an international tournament, won that, and hooked up with MadCatz. Again, it's in the book, and it is a good book so check it out.

So they cut now to a spotlight on another "new job": Data Scientist. I'm also skipping this, even though that is basically what my job is.

They mention that they are now at the end of November, and they had been talking about CapCom Cup, so I suppose this was filmed prior to CapCom cup. I hadn't mentioned before, but in the scenes in Daigo's house there was a dog, and you heard a woman off camera sometimes. Now we open and Daigo's like "it's a lot more quiet around here now" and when the NHK person asks why, he says that the dog is gone. His girlfriend of four and half years broke up with him, and the dog was hers. He is also missing a lot of electronics (rice cooker, microwave, TV, etc.) I watch a lot of these TV specials, and I'm always surprised at how the human side of things hits me. Particularly the shows with Momochi and Chocoblanka, how hard they work and struggle, how emotional things get when there are losses at tournaments. Daigo here seems, as Daigo always seems to me, very calm and relaxed, saying that "Things will be fine", but this is a really personal look into his life, and the candor these programs show is often surprising to me. He says the main reason for the breakup is that he didn't pay enough attention to her. He says a lot of gamers are getting married, and that takes a lot of courage. He's not sure how that would work. He is talking about all of this while in training mode on the remaining 24" non-TV monitor.

Now the show moves to Anaheim for Capcom Cup. He goes to a hotel room that is just dirty with setups and Japanese players practicing. Setups everywhere. Twenty people or so, all the big names. They talk about and show Daigo matches at CapCom cup. They translate some of UltraDavid and James Chen's commentary on the Daigo - MenaRD match. More interesting is Daigo's commentary over the play:

They get a few people from the crowd to talk about Daigo, I have no idea who they are. Daigo says that when the crowd gets into that much, he really feels like it was worth all the effort he put into things over the year. Of course, he isn't 100% satisfied, but it was a good result and he had fun.

I enjoyed the show. I am shocked that they did not go into what I think is an even more important part of what Daigo does in his job: thinking of new approaches to involve people in the FGC. Daigo (and Jiyuna!) made BeasTV which always puts on interesting exhibitions, and the Kemonomichi stuff is great, Project 9Road, the roundtable discussion he hosted on money and games in Japan, all sorts of interesting stuff. A large part of what he does is broaden the scope of what FGC can be, and thinking about what it should be. They also didn't touch on the business side of things like finding sponsors and getting advertising, things like that. Still, it was an interesting show.