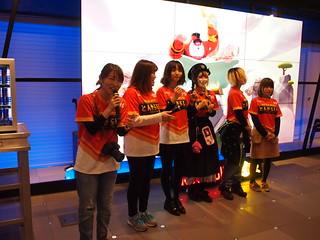 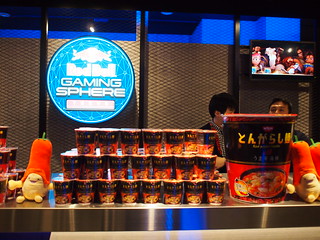 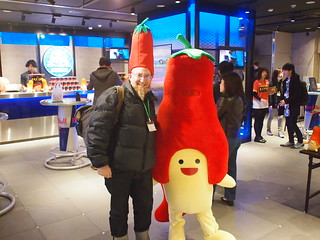 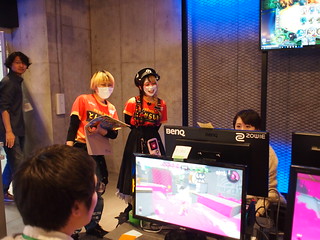 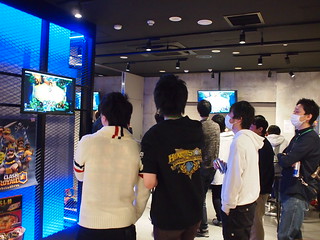 On Sunday, March 18th, Shinobism's Project Gaming Girls (P2G) held a multi-title gaming event at the RedBull Gaming Sphere in Nakano. This was a multi-title event, with Capcom's Street Fighter V, Nintendo's Splatoon2, Blizzard's Hearthstone, and Capcom's MVCI. The event was from 1pm to 5pm, with the various P2G members hosting activities for the games that they play.

First, what is P2G? P2G is a gaming team that Chocoblanka and Momochi started last year, and have expanded this year. They sponsor women specifically, but probably not in way that you would think typical of gaming teams. Here are some excerpts from the P2G page:

So P2G has as a goal expanding opportunities for women to get into gaming, and to continue doing it. I think that is a great goal, and I also think it is an obligation of every gamer to be friendly and welcoming to all people joining the community, and to treat everyone fairly and without bias.

This is the first event that I've been able to attend hosted by P2G – and it might be the first one they've held, since I've been following since the beginning and don't remember any other events.

The event was held at the new RedBull Gaming Sphere, which is a very nice space in Nakano. Admission was free, which is amazing if you think about it. Somehow P2G was able to organize support from a variety of sponsors. That explained the presence of Nissin, who also had a big hand in sponsoring EVO Japan 2018. There was pre-registation for the event, but there weren't so many people that it was overcrowded. The space was separated into stations by game.

The staff was checking names to make sure you had registered, and they asked you whether you would be OK appearing on stream or not. If not, you got a red lanyard and a name tag to write your name on. If you didn't mind, you got a green lanyard. In Japan, people are very concerned with personal privacy. You often will have notices posted at events if there is streaming, and I like that hear that have a nice little solution with red/green colors to make it clear. None of my photos should show people with red badges, and I tried to choose pictures without many identifiable features for the non-P2G members (who I assume are ok with it, since they do media appearances - although thinking about it now, I should have asked).

Mostly during the event people played casual matches. I wandered around and looked at some of the other games. I've never played Splatoon, so that was interesting. I get lost in real life though, and 3-d games like that are tough for me. I would have to play that game with the map on all the time. It does look pretty fun though. I'm going to stick with 2-d games on single plane though.

Harumy is the SFV focused P2G member, and she was playing people on one of the setups. At some point, she called for people to take part in a 5-5 team battle, and we did that. The team battle mode in SFV is really pretty fun. We later did a tournament for a random 3-3 team battle, which was lots of fun too. The winner took home a case of Nissin spicy cup noodles.

The other sections had various tournaments and activities as well, but I spent most of my time in the SFV area, playing games and talking with people.

Near the end of the event, the P2G members held a group rock-paper-scissors competition to distribute various prizes. The event was lots of fun, and they announced that they plan to hold similar events in other locations across Japan. That is another interesting point - right now, Tokyo and to some degree Osaka (thanks to Cyclops esports basement) are the only two hotbeds of SFV activity. I'm not as aware of other scenes, but it is really nice to see things happen outside of the two major population areas.

Keep your eyes out for P2G members, and give them some support if you can!