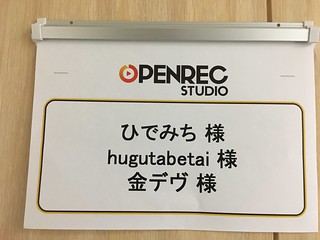 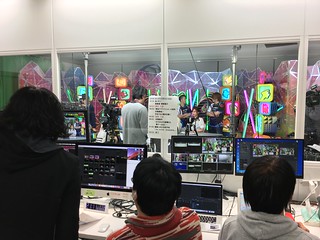 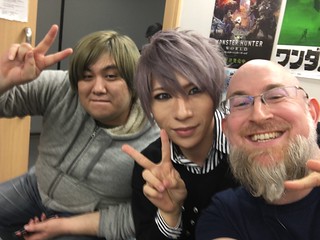 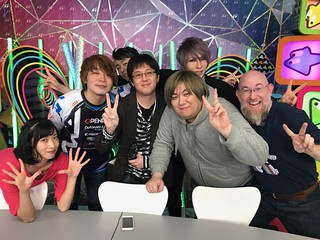 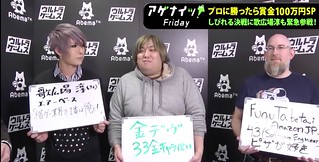 Friday, March 9th, I was invited to appear on "Agenai! Friday" (Episode 7), a show on AbemaTV. What is AbemaTV? It is a live streaming service that adopts the model of TV, and streams content on various channels at a specific time. You can also access their backlog of shows for free. I like their "Ultra Games" channel, which has various video game content. If you haven't tried AbemaTV before, check it out - there are many channels, and they have a lot of original content. They also have lots of Anime. It is all in Japanese, so that might be problematic, but some of the gaming stuff is understandable.

One of the shows that I like is called "Agenai! Friday", which is a show about games generally, but often has people playing in a contenst using Street Fighter V. They will do different events for different games, but often will have amateur challengers play against their competitors. The times I've watched, they have had Itabashi Zangief and Tachikawa as their professional players, and also Kuramochi Yuka on the show. If you don't know who Kuramochi is, I first heard about her at EVO Japan. She was a reporter for the Japanese stream, and interviewed some of the players and attendees there. I didn't realize that she is a glamour model until I followed her on twitter, and the pictures she posts pretty quickly makes it clear that she works in the glamour industry in Japan. She does play video games, and has a good R. Mika, so I assume she is on the show because of that, and to give a bit of beauty appeal to the audience.

I started watching Agenai Friday when I heard that Itabashi Zangief is on it - he's a player that I really like and have followed for a long time. How does the show work? Usually it opens with some general introduction - the MC is another Japanese Talent, Kendo Kobayashi, who chats a bit with the others on the panel. They might talk about a new game for a bit, but in the second half they introduce the challengers who will play their stable of pro players. If the challenger wins, they get a cash prize - usually about $2000 USD (200,000 Japanese yen, I'll just use USD with 100yen/dollar). If the challenger does not win, that goes into the prize pot, up to a maximum of $10,000. So that is a pretty nice prize! The Street Fighter V set is best of 5 games, so the first person to win three games.

I've watched the show a few times, and some of the challengers have been people that I recognize or know from the weekly Street Fighter event called Fighter's Crossover Akihabara (FCA from here on). I usually go every week, if I can make it. Last week, I was approached by a Mr. U., who asked if I would like to be on the show. We talked for a bit, and I told him that I wasn't very good at the game - I'm ok, generally a Gold/Platinum level Zangief, but in Season 3 I'm trying to play other characters. He thought it would be interesting though, so I agreed. This is likely a case where I'll be playing the role of "hey look, a foreigner who can speak Japanese!" but that is fine. I really like the fighting game community, and one of the things I would like to do is make it easier for English speakers to learn about the Tokyo Fighting Game Community (FGC from here on) scene. So I'm happy to go on a show and talk about whatever, but maybe I can get a few words in about how great the FGC is, and also talk about how anyone - old, young, good at the game or not - can join in, have fun, and make friends.

So the next week on Friday I showed up to the Abema (actually Openrec) offices, and met with the other people on the show. Usually there are two challengers, but this time there were four. Hidemichi, who is also a regular at FCA, Kindevu, a well-known strong FGC player who isn't a pro (yet?), myself, and Utahiroba Jun, who is a rock star - the bassist for the group Golden Bomber. He is a big Street Fighter V fan (and very good) and apparently wanted to be on the show.

We heard about how things were set up, how the show would go, and then headed over to the studio. The place was smaller than I would have thought (never having ever seen a studio of any kind before) and got ready. We set up our controllers, played a game or two, and then stood on our marks and waited for the show to start. Us four challengers lined up, we had these white boards that we wrote our name/tag, age, and occupation on, and Kendo asked or commented on each of us. Then they transistioned the show into the competition segment.

Since Hidemichi was on the previous weeks' show, he was up first, and the rest of us drew lots for order. Utahiroba Jun was first (and he was super happy about it!) Kindevu was 3rd (and he was super sad about it!) and I was second, and didn't particularly mind either way. I really want to see Kindevu go back on the show because he could potentially win it. I didn't have a snowball's chance in hell, although I'm pretty confident that I could win a set against Kuramochi.

While Hidemichi got ready for his set - the competitors also draw lots, and he was to face off against Kuramochi first - the other three of us went back into the production room to watch. Hidemichi lost the first game, but came back to win the next three, and then face off against Tachikawa. It was lots of fun watching back in the production room, and the place went nuts when Kuramochi won the first game. After that, Tachikawa was randomly chosen as the next player. Hidemichi got one game on him, but in the end Tachikawa won.

Utahiroba Jun was up next. Usually the challengers just play individually, but Jun asked if he could bring Kindevu out as support. Kindevu is a well-known strong player, and Jun knows him. He was really happy to meet him, and the whole time we were waiting Jun and Kindevu were talking technical aspects of the game, points on different matchups, things Jun should look out for if he played Itabashi or Tachikawa. I've been playing SFV since it came out, and I follow the tech and frame advantage / disadvantage, but as an old (and old-school) player, I don't pay as much attention to that stuff as I should. I prefer to play a few matched online instead of spending time in training mode (I usually get about 2 or 3 hours a week to play games) so I'm not the right guy to talk to about those technical aspects of the game. Kindevu and Jun definitely are though. So Jun asked if he could get Kindevu to come out as support, and the production team thought that was a great idea. Mostly, I think, because Kindevu's name in Japanese means "Golden Fatty" and Jun is a member of the "Golden Bombers" rock group. That makes for a fun gag on a show like this.

For some reason, they then thought that I should go out too, so I did. First up was Kuramochi, again drawn by random lot. She was not happy to face Jun, because he's very good and in a previous event they had played each other and he totally demolished her. Jun didn't show any mercy this time either, and his Ken ran pretty roughshod over Kuramochi's Mika (who still is better than average). Normally, after the loss the MC would have the other competitors draw lots to see who Jun would play next, but since Itabashi Zangief hasn't played in a while (Tachikawa keeps getting randomly selected) Kendo sent out Itabashi. Jun was really getting hype, and I could really tell that he is used to the Japanese "Talent" style of playing along with the MC / other guests on panel shows. He was talking up his game, he called out Tachikawa for being a rude young kid earlier when he won his matches, and just generally brought a lot of energy to the studio. He played well, and got a few rounds, generally keeping things competitive against Itabashi's Abigail. In between rounds he would reach out and rub Kindevu's belly (because he looks a bit like a fat Buddha golden statue, and rubbing their bellies gives you good luck) and once or twice rubbed my bald head. For luck. He's a real showman.

The show is only an hour long, and the show ended before their set did. We played out the remainder of the set and that will probably show up somewhere eventually. Overall it was really a lot of fun, it was super exciting to cheer Jun on, and just seeing how these shows work was interesting. One of the taglines on this show is that people who are watching the show could come on the show and compete for the prize money. One of the things I enjoy most about the FGC is that it was born from the arcade culture, where all you need to play is a quarter and you can play anyone on the machine regardless of level. All sorts of people can be a part of the FGC, and while we might not all be great players, we can all have fun. In actuality, I think it is very rare for someone to actually beat the show's pros in a first to three set, but I love that they open that opportunity up to people - myself, or a fan from a rock band, or a regular at the weekly local (Hidemichi) or a well-known strong unsponsored player.

If you are interested in fighting games, I think they are a very accessible type of video game to watch. The big health bar at the top of the screen goes down, and the winner is the one who has some health left. That is pretty easy to understand, even if you don't know what is happening on screen. If you are watching shows like this, and think it looks fun, try to go to a local event near you. Most local scenes are happy to see new people and help them get better.