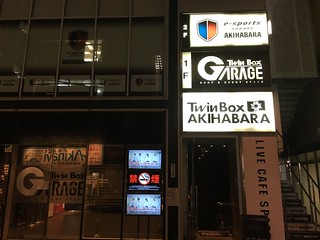 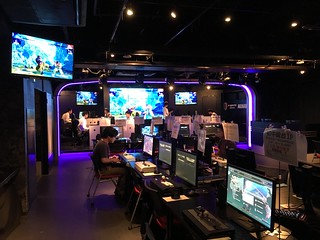 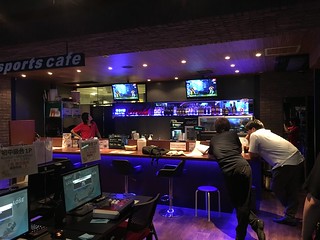 On Wednesday I went to e-sports Square Akihabara for the first time. I've been meaning to go for over a year. It is an e-sports Cafe, and every once in a while (once a week?) they run the "Fighter's Crossover" event. That currently seems to be focused on Street Fighter V, which I enjoy. It is out in Akihabara, a place where I almost never go any more - even though I would like to. Akihabara has changed since my seminal memories of the place when I went at the young age of 13 - there were electronics everywhere, and not a maid or anime thing in sight.

The e-sports Square is a quick walk from the Akihabara JR Station. I didn't know anyone there, but the staff were welcoming. You just have to sign in with a little bit of information (in my case, name and age.) They didn't need proof of my age, but I guess that would change if you were younger-looking.

They give you a little card on a lanyard that tracks when you enter, and you can charge drinks and food to it as well. You pay on the way out. They have two hour, three hour, and all day plans.

When I got there it was pretty empty, but after an hour or two the place filled up. I think there were close to 40 people. They had about 30 SFV setups - most of them were head to head, so you had your own screen and played someone sitting across from you with their own screen. There were LP limitations on some of the setups, so there were some systems for beginners, some for intermediates, and the rest were unlimited. The signs said that you should play best 2 of three, and the beginner and intermediate machines only let you have a 5 game win streak. The other machines were winner stays on.

I had a lot of fun, and I'm going to try to go back in the future. Late night Akihabara on a weekday is pretty crazy. There were lots of lights and some maids were still out. That place is weird.

Re: Street Fighter V at E-sports Square in Akihabara, Tokyo

OMG waaay back in the day there were some places similar to this in Colorado... I really miss those days, but there are a few similar gaming places I've been introduced to while I've been living in Fukuoka. Bringing back the old school gaming for the entire day passes!! Posted 4 years, 10 months ago by Nihon Scope • @ • www • Reply